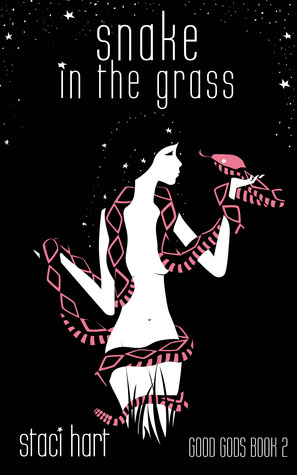 Title: Snake in the Grass

It’s Round Two of high stakes Love Connection on Olympus, and this time, everything has changed. For Aphrodite, at least.

Ares is on deck, and Aphrodite is nervous. As much as she loves to hook up with him, she doesn’t trust him as far as she could throw him, which isn’t very far. He’s a big dude. They haven’t been together in a very long time, but she can’t resist him. She never could. Even when every part of her screamed that he was a liar.

Ares has a plan to keep Aphrodite, for good this time. He wants to win the game, but he’ll hold back to get what he wants. He’s sitting on a chance that he’s been waiting thousands of years for, and he’ll do what he has to do to convince her to stay forever.

The only thing that could stop him is the secret that he’s been keeping from her for eons. If she finds out, it will destroy everything.

Kat and Dillon have been through a lot, and everything has been to protect their younger siblings. They have sacrificed everything to make sure their brother and sister are safe. The players are tough and loyal. Fierce and determined. But they become each other’s weakness, even though they fight it, and even though it means danger for Kat and her sister.

If Aphrodite can get the players over their egos and issues long enough to see that they’re meant for each other, the competition will be a piece of cake. One that she’ll eat a la mode, right in front of Ares, if she beats him.

I really liked the first book in the Good Gods series, Deer in Headlights so I was really excited to read Snake in the Grass. While the first book is great, I like this one even better!

Aphrodite won against Apollo in the last game of the Gods. And now, Aphrodite’s opponent will be Ares, the god of war.

I really like the main characters in this book—Dillon and Kat. Let’s start with Dillon, he’s a very angsty bad boy. He’s got this sexy and bad ass attitude in him that makes him very lovable. He’s a very strong fighter which stemmed from his childhood when he was always beaten up by his father. Emotionally broken characters have that special appeal, no? And I’m gonna be honest here, I am a sucker for bad boys.

His love interest, Kat, is one badass girl too. She’s a drag racer, and drag racing is a world dominated by males but she won’t let testosterone-fueled thugs threaten her on the race tracks, she shows them who the boss is. That’s exactly what I really like in a female protagonist. Kat is also a very strong, smart and independent woman. I also love her mouth which is always capable of spouting vulgar or witty lines that drives Dillon crazy when they bicker.

The Aphrodite-Adonis-Ares love triangle was a nice side story. I know that the Dillon-Kat love story is supposed to be the main focus of the story but the Aphrodite-Adonis-Ares love triangle is equally entertaining to read. I never really liked Ares since the first book but I do think Adonis is turning into a total jackass in Snake in the Grass. No hard feelings Adonis fans!

I only have one word for this book: badass! In one corner you have a tough chick with tongue as sharp as switchblade, and on the other corner you have an emotionally wounded, mysterious yet charming man who’s too afraid of himself to ever love somebody. And then you have messed-up gods up above pulling the strings of this love story. This can’t get any better!