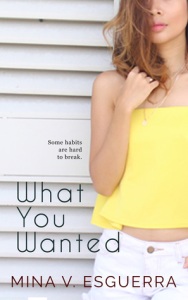 Title: What You Wanted (Chic Manila #5)

It’s the classic one-night stand: Beach wedding, bridesmaid, groom’s friend. When Andrea and Damon meet, sparks fly, and they give in to the attraction. Sounds simple, but Andrea’s still getting over someone, and Damon thought he’d be hooking up with another person that night. It could still be simple, really, if they chalk it up to a weekend tryst and move on.

But one night becomes lunch the week after, and then dinner the next weekend…and before they know it, Andrea and Damon are still together, dealing with the feelings they know they might still have for other people. How hard can it be to get exactly what you want? How do you even know what it is?

What better way to find love than in a wedding? Andrea and Damon was in Andrea’s sister’s wedding having their own agendas. Andrea was there to support her sister, Damon was there for another woman. But everything changes for him when he met Andrea. They had a one-night stand and one-night stands have one simple rule: never see the other person the morning after, or ever. END_OF_DOCUMENT_TOKEN_TO_BE_REPLACED

Everyone knows you should never say never.

Cooper Moore never saw Maggie Williams coming. She was just his best friend’s little sister, the curly-haired, freckle-faced girl from Mississippi who was absolutely off limits. And he never thought about her any other way — not until he saw her that night, broken and brave. From that moment on, he knew he’d do whatever it took to protect her, even if it meant he had to stay away.

Maggie never expected to find her fiancé banging her maid of honor an hour before she was set to walk down the aisle, but life’s funny that way. The only option to save her sanity is to get the hell out of Jackson and move to New York where her brother lives. The only downside: Cooper is there too. And she just doesn’t know if she can stay away from him — the filthy rich, dead sexy playboy who’s allergic to commitment.

The second Maggie sees him again, she realizes he’ll be impossible to resist. Luckily, commitment is the last thing on her mind, and Cooper is the perfect escape. As long as she can keep her heart in check, everything will be just fine. Because she can never have feelings for him. Or at least that’s what she’ll keep telling herself.

Chaser is a standalone romantic comedy and book 2 of the Bad Habits series.

I am fangirling so hard and trying my best not to type an exclamation point after every word I type.

“Go out with a stereotypical romance novel hero WHO ISN’T YOUR TYPE.”

Avid reader and art student Steph is participating in a monthly blog challenge to Live Like Fiction, and this was the task for October. When Grayson, former co-captain of her university rugby team, walks into her class, she knows it’s meant to be – she has to go out with this guy. Even if she’s never been attracted to big, hunky, athletic types. With Grayson’s “player” reputation off the field, Steph thinks he’ll be good for one date that’ll be worth blogging about, and that’s it.

But you know how it goes: Soon, it becomes more than just one date – and Steph and Grayson are caught up in “living like fiction.” How long can they keep playing their roles before reality steps in?

I was so excited to get an advance copy of Learning To Fall, and for a good reason. It’s not a secret that I’m a huge fan of Mina V. Esguerra. And I was really intrigued with the book because it was a love story about a rugby player named Grayson and a book blogger named Steph. I don’t know much about rugby, but Steph is practically a sister from another mother.

END_OF_DOCUMENT_TOKEN_TO_BE_REPLACED

Title: Worth Dying For (Jack Reacher #15)

Jack Reacher arrives in Nebraska, having survived the events of 61 Hours, when he runs afoul of a local family with a stranglehold over the county and skeletons in their closet. An unsolved murder in the area from a quarter-of-a-century before draws Reacher into the business of everyone in the area.

This is my third Jack Reacher book and I must confess that after reading the first and second book I skipped to the fifteenth book. There’s no particular reason for doing this, I just felt like it. The Jack Reacher series has been around for a long time now and it’s become a household name in the mystery/thriller genre. I wanted to see how much Lee Child’s writing changed over the years.

END_OF_DOCUMENT_TOKEN_TO_BE_REPLACED 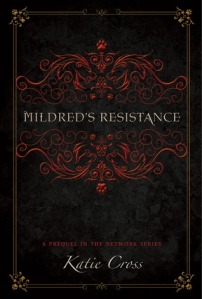 Absolute Power Corrupts Even the Best of Friends.
Mildred Graeme is a witch that knows what it’s like to fail. She loathes small talk, struggles with magic, and grew up wretchedly poor. What’s easy for her best friend Evelyn, a wealthy, powerful socialite, is difficult for Mildred.

The two lifelong friends reunite at Chatham Castle where they fight together for the dream of a better world. Mildred wants to save the Network from political elitism, while Evelyn encourages it. When Evelyn gains power and threatens to obliterate the Network, Mildred realizes that she must overcome her fear of failure to save the lives of those she loves, even if it means betraying her best friend.

Mildred’s Resistance is the prequel to The Network Series and a gripping tale of intrigue, betrayal, and unexpected romance that defies all odds to rise above the ghosts of failure.

The Network Series never cease to amaze me. The series gets better and better with each book. For a long time I’ve wondered what happened during the Dark Ages of the Central Network when Evelyn became the High Priestess. Not much was revealed in the first two books in the series and I was really intrigued. I’m glad that Cross wrote a prequel and explained all about the history of the Central Network.