Hey guys! I’m so excited to share this news to you– Doe Eyes officially comes out today!

I am a huge fan of the Good Gods series and I’ve been really looking forward to this book. The Good Gods series is like a breath of fresh air in the New Adult category. It has steamy romance with a little fantasy twist in the form of the Greek deities in the mix. So without further ado, here’s the blurb and the very gorgeous cover of Doe Eyes. 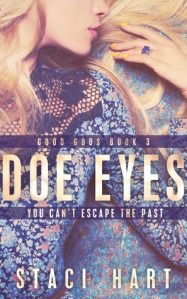 Aphrodite knows better than anyone how the heart works. Just don’t ask her to figure out her own.

She’s been away from Olympus for weeks, which wasn’t near long enough for her move on from everything that happened, to get past the betrayal and loss. She has no idea what she’s walking into when she gets back other than a new competition, this time against Artemis. The goddesses have never been friends, but now they have more in common than ever, though they’d rather face eat ambrosia straight than admit it.

Artemis can’t help but be smug. Her player, Josie, is a private investigator who’s lost more than she’s won. Every waking moment is consumed by her fire to catch the man who killed her partner, and when Jon comes back into town after leaving her without a word, it’s more than she can handle. She’ll never let him in. Not again.

But Jon only did what he thought was right, and he’ll do anything he can, give her everything he has to give to prove that he can be trusted with her heart again.

With Adonis gone and the threat of Ares around every corner, Aphrodite’s past presses on her, leaving her more alone than she’s ever been. She can’t help wondering if she’ll ever escape, and how much pain she’ll endure before the whole ordeal is behind her.

Joi the release party and get a chance to win an awesome Good Gods series bundle!

Here’s a teaser to further whet your appetite: