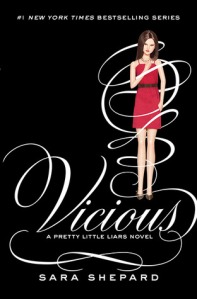 In Rosewood, Pennsylvania, reporters are lined up outside the historic courthouse, typing furiously at their iPhones with freshly manicured nails. Because the trial of the century is happening right here in Rosewood: the four pretty little liars have been accused of killing Alison DiLaurentis. Only Aria, Spencer, Hanna, and Emily know that they’ve been framed. Ali is still out there, laughing as she watches the girls go down for her murder. But when your nickname includes the word “liar,” no one believes you’re telling the truth. . . .

Aria tries to run away from it all but finds that life on the lam is even harder than life as a liar. Spencer gets in touch with someone who can help her disappear–but when a guy from her past reemerges, Spencer no longer knows what she wants. Hanna decides that she’ll hear wedding bells chime before she serves time. And in the face of prison, Emily does something truly drastic–something that will change her friends’ lives forever.

As the trial goes on and the outcome looks grim, the girls are in their darkest hour yet. But maybe they can finally figure out how to beat Ali at her own game. Because once upon a time, she was just a pretty little liar too.

I really love the Pretty Little Liars series but thank goodness it’s now over. I really hope it’s REALLY over this time. Because if you’re a huge fan of the series, you might have heard the news that the series was supposed to end after the eight book but the author felt she can add more to the series. Now that that’s out of the way, let’s get on to the review itself— the meat of this post.

When I learned that this is going to be the last book in the series (for real this time, according to the author) I was ecstatic! Finally, we’re getting a closure. I’m so ready for it, give it to me, baby!

The PLL series lost its luster a long time ago. I’ve loved the first ten or so books in the series, and after that it was just… meh. It became predictable and boring. The only thing that never ceased to amaze me was how evil A was. But other than that, it was so dull. And you might ask, “Why the hell didn’t you just stop reading the series?” I’ve already answered this question in my review of Toxic but I’ll say it again: I’m in too deep, I was too invested in the story that I couldn’t just go cold turkey.

I’m going to spare you my rant and get down to my verdict. Vicious was SHOCKING and SURPRISING in a good way. It was a pleasant surprise for me. Finally there’s another PLL book that’s not so dull and boring. I’m not going to describe the good stuff because I don’t want to spoil you if you’re going to read the book. But finally there’s another PLL book that’s going to keep me on the edge of the seat again. I was a happy reader!

Everything was going fine until the ultimate conclusion. It was the moment of truth. What happened in the end? Did anybody die? What happened to our four main characters?

Well, the ending was a little disappointing. It was good that Aria, Emily, Hanna, and Spencer got what they wanted in the end. But what about A? Honestly, I was a little disappointed about what happened with A. Was that it? It was so anti-climactic. If I wrote the series I could’ve written a better ending, a more exciting one. The conclusion was too open-ended. There were still questions left unanswered. And as a reader I want to be enlightened as to what happened to everyone. But that’s not the case here. The ending was so disappointing and I think part of the reason was because Shepard let the series go so long and complex that it became hard to fix all the loose ends in just one book. And because the story was so complex there was a pressure for the conclusion to be SO great to justify all things that happened in all the previous books.

My knee-jerk reaction was to give the book a two- or three-star rating but in the end I decided to give it a 4-star rating. It was the most exciting PLL book in a long time. And even before I read Vicious I knew the ending was going to be unsatisfying. No surprises there. I’m just glad we can all have the closure we want and that Aria, Emily, Hanna and Spencer are now happy with their lives. They deserved it.