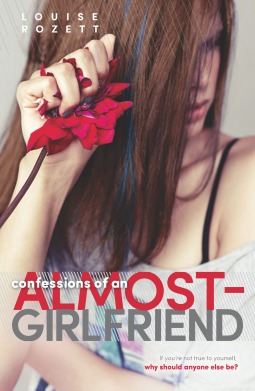 Rose Zarelli has big plans for sophomore year—everything is going to be different. This year, she’s going to be the talented singer with the killer voice, the fabulous girl with the fashionista best friend, the brainiac who refuses to let Jamie Forta jerk her around…

…but if she’s not careful, she’s also going to be the sister who misses the signals, the daughter who can only think about her own pain, the “good girl” who finds herself in mid-scandal again (because no good deed goes unpunished) and possibly worst of all…the almost-girlfriend.

When all else fails, stop looking for love and go find yourself.

I really enjoyed the first book to the Confessions series, Confession of An Angry Girl and I couldn’t wait to get my hands on a copy of Confessions of an Almost Girlfriend. What was so charming about the first book was that at first you may think it is just a cliché high school story but when you look closer, it’s not. It’s about the struggle of being a teenager, the difficulties you experience when everyone realizes you’re different. As a young adult myself, I find myself really drawn into the story and the struggle of the characters. Especially Rose. I love Rose to death and I feel sorry for her because almost everyone around her treats her like crap. I just want to hug her and protect her from all the evil of this world!

“Sometimes people help each other, and get messed up in each other’s business; sometimes we stay out of it and let people find the way themselves. It’s always right to offer help, but not all help is right.”

And then there’s Jamie. No matter how swoon-worthy he is, I still think he’s a douche. Why does he need to be so complicated? Ugh! WHY!?

“I did the wrong thing, and I lost him for real.
But did you do the wrong thing? Jamie thinks it was the wrong thing. But do you?
No. I don’t.
I didn’t do what Jamie would have wanted me to do, but that doesn’t mean it was wrong.”

And then there’s the ending which was so heartbreaking. This book is so frustrating, but in a good way. I feel really engaged in the story, like I am part of it. And for me, that’s always a good sign that a book is great. It’s important for the author to make the reader feel like they belong in the characters’ world.

I feel a really strong connection to Rose and the story stirs so much emotion in me. Oh the feels! I’m not usually into angsty YA books, but Rozett did a great job on this series. I’m pretty sure there will be a third book, we can’t be left hanging just like that.

Title: Confessions of An Angry Girl

Rose Zarelli, self-proclaimed word geek and angry girl, has some confessions to make

1. I’m livid all the time. Why? My dad died. My mom barely talks. My brother abandoned us. I think I’m allowed to be irate, don’t you?

2. I make people furious regularly. Want an example? I kissed Jamie Forta, a badass guy who might be dating a cheerleader. She is now enraged and out for blood. Mine.

3. High school might as well be Mars. My best friend has been replaced by an alien, and I see red all the time. (Mars is red and “seeing red” means being angry—get it?)

Here are some other vocab words that describe my life: Inadequate. Insufferable. Intolerable.

(Don’t know what they mean? Look them up yourself.)

At first glance Confessions of an Angry Girl is just another high school tale. But there’s a grain of truth in this novel. If you’ve been to high school, chances are you’ve experienced some of the things that happened in this book.

I love how none of the characters are perfect, which makes the story more relatable. My favorite character is Rose but there are times when I want to smack her in the head, especially when he treats Robert like crap. I understand her annoyance with Robert but I completely understand Robert too and how much he likes Rose.

I contemplate asking Robert to take me home, but I really don’t want to be alone in the car with him and the condoms. It’s not like I think they’re going to jump out of the glove compartment and do something, but I just don’t want to be around them any more than I have to.

Unlike others, I didn’t really like Jamie. I don’t hate him, hate is very strong word but I don’t like him either. I don’t understand why he  won’t stand up for Rose when he knows what Regina is capable of doing. I’m sorry but for me he is a wuss.

Every high school tale is not complete without a bitchy queen bee, and in this novel, Regina is the queen bee and guess what her extracurricular activity is– yep that’s right, cheer leading! If I were Rose I’d claw her eyeballs out with my long finger nails and feed it to the vultures. Okay maybe that was a little harsh but hey, she’s a meanie!

Aside from the characters, what made me love Confessions of an Angry Girl is the fact that it talks about the hardships of being a teen, especially sex, drinking, peer pressure, among others.

Maybe it’s me. Maybe I don’t know how to have fun. Tracy always says I need to loosen up. But I don’t want to take my clothes off in front of half the school, and I don’t want to have a funnel full of vodka jammed down my throat. I don’t want demonic cheerleaders making me do awful things, and I don’t want a jock boyfriend who pressures me into having sex and might be cheating on me.

I’m kind of disappointed with the ending but despite that, I still love this book mainly because it’s very relatable. If you’re like Rose and you’re on the same predicament with her, then know that you’re not alone and it’s okay to not do what everybody does sometimes. It’s okay to be different if that’s what makes you happy.

I can’t wait to read the second book to the series, Confessions of an Almost-Girlfriend.