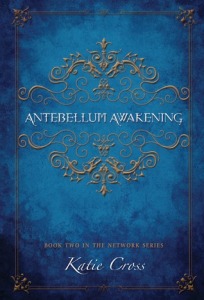 Never underestimate the power of a volatile witch.

Still reeling in the wake of her mother’s death, sixteen-year-old Bianca Monroe is forced to move to Chatham Castle. Not even the sudden appearance of ancient dragons in haunted Letum Wood nor her two best friends can distract her from the strength of her deep, dark rage.

Her grief puts her magical powers into chaos, endangering any witch around her. She has six months left to destroy the curse that will kill her and fulfill her contract with the most cunning enemy of all: her former teacher Miss Mabel.

Bianca must make a choice: learn to control her restless powers, or let the powers control her.

Antebellum Awakening is the second book in the thrilling new fantasy collection The Network Series. It’s a haunting tale about tragedy, loss, and the power of moving on.

When we last saw Bianca in Miss Mabel’s School for Girls, she was miserable and broken by the death of her mother. Now she’s back in the sequel of the Network series, Antebellum Awakening.

After a shocking and tragic incident that totally ripped her apart, Bianca’s magic grew unstable because she was dealing with grief. This unstable magic poses a threat not just towards her but towards the people in her life too. Now she has to control her magic while learning to balance her emotions.

On the other hand, Miss Mabel’s evil plans are slowly coming to fruition, when Bianca tries to outsmart her, she is always one step ahead. I swear I hate her so much. But I have got to admit though that she is an excellent villain, the kind of villain that you love to hate. It seemed that Antebellum is in a brink of war and the situation looks really dire. With this new twist comes some new and interesting characters including majestic dragons and mysterious enemies that pose great threat to Bianca and all the people she cares about.

It is also interesting to see a different side to Bianca, a darker side to her. I don’t think she is bad though, in fact I feel sad for her because she is constantly pushed to her limits, emotionally and physically, with all her training and grappling with grief. But she is a good girl and I know she will pull through it.

What I really like about Antebellum Awakening is that the readers get a deeper understanding about the characters in the first book. We even get a deeper glimpse into Miss Mabel’s personal life history, which I think is cool even though I hate her. The ending of the book looks promising, too. I sense some new enemies are coming and I can’t wait to read the next book in the series!

If you have read the first book and you liked it, I have a feeling that you will enjoy Antebellum Awakening too. But if this is your first time hearing about the Network series, I highly urge you to pick up a copy of the book!

One thought on “REVIEW: Antebellum Awakening (The Network Series #2) by Katie Cross”