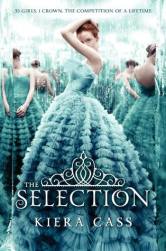 For thirty-five girls, the Selection is the chance of a lifetime. The opportunity to escape the life laid out for them since birth. To be swept up in a world of glittering gowns and priceless jewels. To live in a palace and compete for the heart of gorgeous Prince Maxon.

But for America Singer, being Selected is a nightmare. It means turning her back on her secret love with Aspen, who is a caste below her. Leaving her home to enter a fierce competition for a crown she doesn’t want. Living in a palace that is constantly threatened by violent rebel attacks.

Then America meets Prince Maxon. Gradually, she starts to question all the plans she’s made for herself–and realizes that the life she’s always dreamed of may not compare to a future she never imagined.

Sometimes I regret getting swept off my feet by the hype of a certain book because I expect too much and end up disappointed. Yes, I am talking about The Selection.

The book started well for me. I find it interesting to read a book with a caste system. I also liked America right away. I like how her moral compass is pointed in the right direction, how good of a friend she is to the other girls in the Selection even if some of them are not as nice to her. I knew right away that she has the right qualities fit for a princess and someday the queen of Illea.

“I should have known that if any girl was going to disobey an order, it would be you.”

Aspen is my kind of guy. There’s something about him that I find endearing. He’s a caste lower than America so he feels like his efforts aren’t enough. He is also very proud, he feels like he should always be the provider in his and America’s relationship since he’s the guy. I like it when guys are like this, like they’re really making an effort for you.

“The picture of me just after I’d found out Aspen was saving up to marry me. I looked radiant, hopeful, beautiful. I looked like I was in love. And some idiot thought that love was for Prince Maxon.”

Maxon is not what I expect a prince should be. I expected him to be arrogant and self-centered. But really he’s such a gentleman, down to earth and he’s so kind. I know he would be a great king someday.

“If you don’t want me to be in love with you, you’re going to have to stop looking so lovely. First thing tomorrow I’m having your maids sew some potato sacks together for you.”

So what went wrong? For starters, the pacing was too slow for my liking. The chapters seem to drag on and on and I was so bored reading it! There was much ado about nothing. The book is so uneventful I can summarize the whole book in just one paragraph, seriously. Not to mention the love triangle, I hate how indecisive America is between Maxon and Aspen. Aspen would do something simple and sweet and America is like, “I just know Aspen is the one for me”. And then Maxon would do something grand and America is like, “I can feel it! Maxon is the right guy for me”. Seriously, girl, make up your mind.

I feel like there’s not much world building in the story. Also, there are bits of the story that I think has been haphazardly been thrown into the mix just for the sake of putting it there– like the attacks in the castle. Nothing much is going on with this bit of the story, it’s like it’s just a filler to add more word count.

I picked up this book expecting I would really like it but ended up being disappointed. There are good things about the book but for me the bad things outweigh the good parts. I feel like The Selection has a potential to be a much better book, it only needs just a tad more polishing. Regardless, I am hoping the second book to the trilogy will be better.