Hi guys! You might not know this but I love the Good Gods series. Today you’ll meet one of my favorite characters from Deer in Headlights (#1 Good Gods series). Here’s Lex, an artist and poet with a guarded heart.

An artist and poet who works at a book shop. She’s never been able to fall in love, even though she’s had one boyfriend after another since she turned sixteen. Lex is afraid of love because she doesn’t want to get hurt, but when she meets Dean, she almost doesn’t have a choice. Her best friend, Kara, is her sounding board and a constant in her life, and someone who she couldn’t live without.

“Seriously, the longest I think I’ve gone between guys is two weeks, and I cried the entire time that I would be alone forever. How is it possible that I’ve never been in love?”

She felt spellbound, like she’d been hypnotized. Like Mina and Dracula, as if he’d somehow infected her, and logic and reason no longer applied. Ultimately, she didn’t get it, and was torn because even though she knew she should stay away, she was equally fascinated, dreading and anticipating every chance she had to see him.

They’d only spoken a few times, but she watched him during band practice like a stalker. Dean had all the makings of a man-sized Venus Flytrap. Everything about him called to her, and every other woman in a fifty-foot radius, but she knew that if she got close she would get eaten. Hopefully eaten in the sexy way, but she figured more likely it would be in the way that she would experience a slow and painful death via metaphorical stomach acid.

She’d dodged a bullet, she told herself, over and over, but it hurt like she had taken it in the heart.

Aphrodite never loses, not when it comes to love.

Immortality has its perks and its downsides. Boredom, for one, is unavoidable, but instead of playing parcheesi, the gods devised a game that uses humans as pawns. Remember Shakespeare? That was Apollo. Bonnie and Clyde? Aphrodite versus Ares.

Aphrodite is on deck once again, and she’ll defend her domain of love as she works to get the humans together before the clock runs out, while her opponent tries to keep them apart.

Game one is against Apollo, and Aphrodite knows she has her work cut out for her when he chooses Dean, a brooding rock star man-whore who believes women can’t be trusted. Aphrodite decides on Lex, a perfect match for Dean, even though her heart is guarded, locked away tight. She’d never let anyone in. Not ever. Of course, she hasn’t met Dean.

But there’s always more at stake than just the game when you’ve lived for thousands of years. The Olympians are the original dysfunctional family, surviving eons of love and lust, betrayal and lies, as friends and enemies, through feuds and wars. From Ares, the douchebag, who’s forever trying to start a fight and get Aphrodite into bed, to Persephone, her best friend, who she can always count on for a healthy helping of bacon on a bad day, the gods will take you on a lighthearted trip as they mess with humans, laugh and fight, lose love and gain power.

Download Deer in Headlights
Check it out on Goodreads 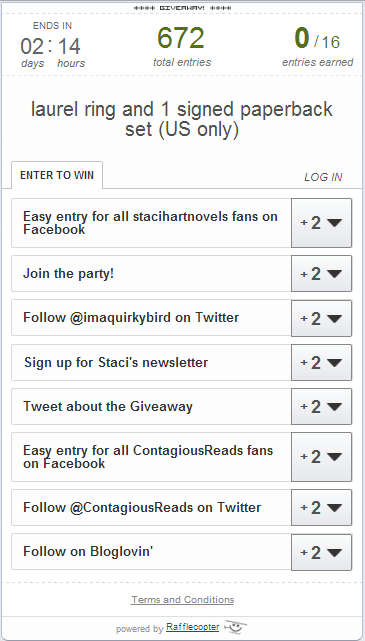 Click the picture to be redirected to the Rafflecopter widget