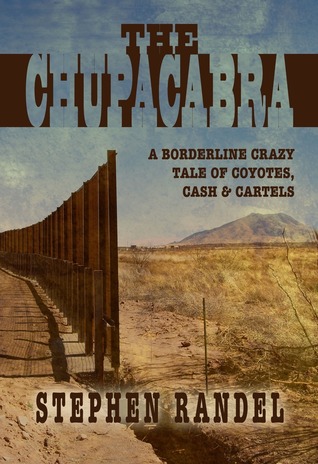 Title: The Chupacabra: A Borderline Crazy Tale of Coyotes, Cash and Cartels

He is called El Barquero. He makes his trade along the border, smuggling guns and killing without remorse. As he faces his one last mission, his perfect plan is unwittingly foiled by Avery, a paranoid loner obsessed with global conspiracy theories who spends most of his time crafting absurd and threatening letters to anyone who offends him. That means pretty much everyone.

What unfolds is a laugh out loud dark comedy of madcap adventure stretching from Austin to the West Texas border featuring a lunatic band of civilian border militia, a group of bingo-crazed elderly ladies (one packing a pistol nearly as long as her arm), a murderous and double-crossing cartel boss, a burned-out hippy, and a crotchety retired doctor and his pugnacious French bulldog. Read it to believe it.

The Chupacabra doesn’t seem my cup of tea. At first I was really hesitant to read it. Before reading the book, I knew  what a chupacabra is– a mythical creature that are said to inhabit Mexico and kill people but when they do not drink the blood of human, they prey on goats instead. Upon hearing the title I immediately thought it was of the paranormal genre, and then I found out the genre of the book is humor. I told myself I will give it a try.

I’m glad I did try reading the book because I absolutely love it.

Avery is a firm believer of the existence of the chupacabra. And because of this he got mixed up in the business ofEl Barquero and the drug cartel operating near the Mexican border. He is an intellectual character yet at the same time he’s so bizarre and paranoid. Oh, and I find his obsession with Mountain Dew fascinating.

“My reality is so compellingly fascinating, I couldn’t ever

imagine needing to escape from it.”

The other characters like Polly, Kip, the STRACBOM and Ziggy are all very funny too. They add more color to the story.

If anybody would have seen my laguhing to myself as I was reading this book, they’d think I’m crazy! I am not the one who’s crazy, this book is! It’s an honest-to-goodness comedy book and needless to say, I love it.

“I thought humans were at the top of the food chain?”

At first I didn’t see the connection between all the characters. All of them just seem so random at that time but all the pieces of the puzzle fall into place as you read the book.

However, there was too much build up in the story at the beginning and too much unnecessary character background and it was a little slow-paced. It was a little later when a link to all the characters in the book was established.

But all in all, it’s a definite read if you’re looking for a good laugh and action-packed scenes at the same time.

2 thoughts on “The Chupacabra: A Borderline Crazy Tale of Coyotes, Cash and Cartels by Stephen Randel”